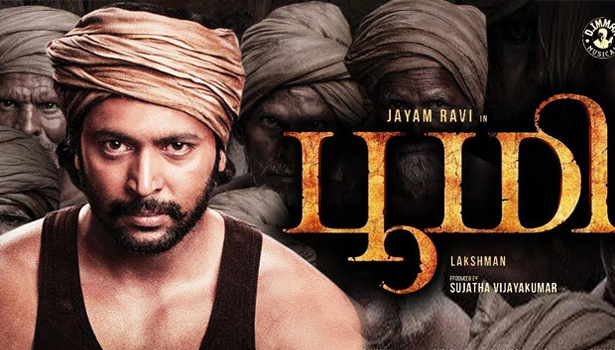 When we are first introduced to the protagonist of Bhoomi, Bhoominathan (Jayam Ravi, in his 25th movie), he is addressing the media as an astronaut/scientist working in NASA, explaining an upcoming mission to Mars. Before embarking on this trip, he decides to pay a visit to his native, in Tamil Nadu, with his mother (Saranya Ponvannan, in what could be her least effective mom role). He learns about the plight of the farmers in his own land, who are being exploited by a money-minded corporate (is there any other quality to them in our films?). And so, the guy who was planning to make Mars hospitable and cultivable decides that he needs to set things right in his homeland first, by turning a farmer, and fighting the good fight.

Bhoomi deals with a subject that has, of late, become a pet project for many of our leading men on screen — farming. Thus, for the umpteenth time, we get to see a hero spouting innumerable dialogues on the importance of farming. It is cheesy but in a cringey way, so much so that after a point, we want to tell him, ‘Boss, we get it! Farming is the greatest. Move on!’ Given the reality that we are currently in the midst of a farmers’ protest, our films should be making us empathise with their cause. Rather, films like these actually seem to be doing the exact opposite — turning the very issue into a tiresome affair for us.

The lesser said about the so-called romantic portions in the film, the better. Let’s just stop with saying that the romantic interest here, Sakthi (an inexpressive Nidhhi Agerwal, who is more or less a background prop) is the latest addition to the loosu ponnu heroine gallery in Tamil cinema.

The antagonist here is a corporate behemoth, run by a foreigner named Richard King (so much for subtlety!). Ronit Roy plays this role, and the actor’s main focus seems to have been in getting the lip-sync right (while not perfect, let’s just say he fares better in this aspect than most villains imported from the north) that his performance becomes a casualty.

Bhoomi and Richard are involved in a cat-and-mouse game, but one that is hardly compelling. We see them exchanging counters in person and over phone, but not a single line feels memorable. And the moves and counter-moves that director Lakshman cmes up with are quite simplistic; the hero manages to solve any issue that the villain creates for him in the very next scene! For example, when the villain creates a sudden lorry strike, which threatens to make the produce cultivated by the hero and his team go waste, the hero immediately manages to organise alternate transport.

The logistical challenges — which would have been a nightmare in real life — are conveniently stepped aside. And the irony of a movie with an anti-corporate message releasing on an OTT platform owned by a corporate is hard to miss!