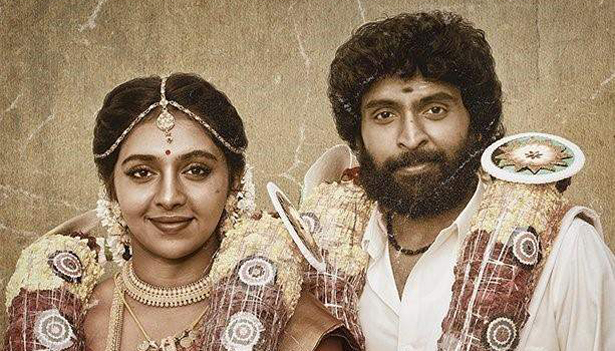 Director M Muthaiah’s films are essentially the same, and they all begin with: Once upon a time in a village in Tamil Nadu, there lived a young ruffian (YR) with a heart of gold. He goes around beating fellow YRs whose hearts aren’t as golden as his. He has his trusted aides, usually a loudmouth uncle/cousin and a faithful coterie of friends. One fine day, YR meets a woman who is headstrong and independent. And of course, it is love at first sight, or at least after she witnesses his first fight. In between all this, one of the recipients of YR’s short temper vows revenge against him. Also, YR’s prospective in-laws would have an agenda of their own. Now, in the Muthaiah Cinematic Universe (MCU), this YR could be named Kutti Puli, Kombaiah Pandian, Marudhu, Kodi Veeran or… in this case, Pulikuthi Pandi.

Pandi (an earnest Vikram Prabhu) is a Muthaiah hero through and through — right from the shabby beard to the twirled moustache to the lungi tied above thigh level. On the opposite end, we have MCU regular Lakshmi Menon returning to Tamil cinema after a four-year break as Pechi. Incidentally, this film could have been the first time an MCU film was named after the leading lady… but alas!

The central conceit is very simple. Pechi’s family has a bunch of wastrels who are caught up with some ruthless money lenders lead by Sannasi and sons (Vela Ramamoorthy, RK Suresh, Aruldoss, etc). Pandi, who by now has quit his ruffian ways for Pechi, steps in to resolve things peacefully. But then, the inevitable (and something else) happens that changes everything. Somewhere between all this war and peace, we have Tamil Cinema’s very own conscience keeper Samuthirakani in a cameo. He plays a comrade who sings about oppression, raises a voice for the voiceless, opposes police brutality, and is completely selfless to the point of infuriating his family. Like all good things, he too has an untimely end. Although his steely presence just adds to the runtime, he is an interesting addition to the MCU, which operated on a completely different tenet all these years.

Such subversions are galore in Pulikuthi Pandi, which introduces the hero in the most stereotypical of places — the sarakku kadai — only to have him sing a song about the ill-effects of alcohol. Pandi finishes off all his punch dialogues — “Nallavana adichu pazhakkam illa… nallavanukkaaga adichu dhaan pazhakkam” or “Police thappu panna podhumakkal adippaanga la… adippom… adipen…” — in just 15-20 minutes, only to turn into a sober hero straight out of a Vikraman film.

Trust filmmakers like Muthaiah to use their films to showcase the lives of people in rural areas to a larger audience. Where else can you see villagers and small towners not being typecast as farmers or ruffians? In Namma Veettu Pillai, we saw Sivakarthikeyan own an oil factory. Here, we see Vikram Prabhu in the jaggery-making business. There’s also a point to make about the downright pedestrian humour in some of these films. In Pulikuthi Pandi, Singampuli, Dheena and Cook with Comali-fame Bala seem to follow a similar line, but their surprising changeover towards the end of the film almost makes up for the inept humour.

At the heart of Pulikuthi Pandi is a simple and effective one-liner with a shocking final reveal. However, we are forced to look past generic happenings for two-thirds of the film, just for that one twist. There is no doubt that it is these last few minutes that leave us with a fondness for the film, and it works thanks to the performance of a fiery Lakshmi Menon.

Pulikuthi Pandi, which was made as a quickie in the latter half of 2020, became the second film shot during the pandemic to be released directly on television. With the kind of reception this film got on social media, it is clear that going forward, entertainment consumption post-pandemic isn’t just a two-pronged race. There is one more player — the direct-to-television releases. If Tamil cinema needed a Master to revive the theatre-going habit of people, Tamil television will likely look towards the Muthaiah template of family dramas. Given what we’ve seen in Pulikuthi Pandi, it does seem like the ideology of Muthaiah is slowly evolving. Or this could also be yet another subversion just to swim past the criticisms. Which one’s true? Well, we’ll have to wait and watch Phase 2 of MCU.