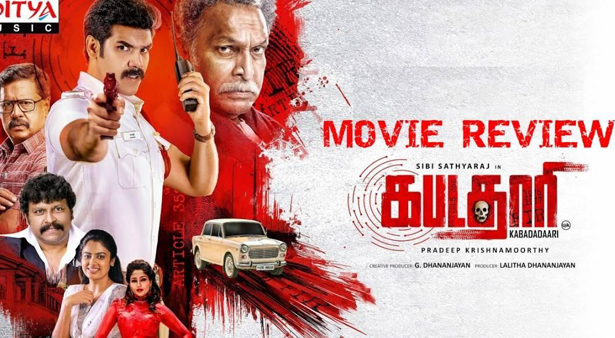 After Sathya, Sibiraj and Pradeep Krishnamoorthy have joined hands for the second time for Kabadadaari. Interestingly, this time, too, it is a remake, and they have chosen a whodunit thriller again. The story revolves around Shakti (Sibiraj), a sincere traffic cop, whose real interest lies in handling crime-related cases. One day, he accidentally comes across the skeletal remains of a three-member family, and he decides to pursue his interest despite warning from his senior officer.

However, his plans hit roadblock when he gets to know that the remains are four-decades old. His encounter with Kumar (Jayaprakash), a small-time journalist who is equally interested in the case, helps him unfold many mysteries. The arrival of Ranjan (Nasser), a retired cop, who investigated the case decades ago, and actress Ramya (Suman Ranganathan) into the plot, makes things complex for Shakti. Will he be able to solve the unusual case?

The major positive aspect of the movie is its engaging screenplay which is devoid of unnecessary deviations. The way Hemanth’s story from the Kannada version has been improvised to suit the Tamil nativity deserves mention. The effortless performances from Nasser and Jayaprakash act as catalysts to the screenplay which keeps the viewers hooked till the end. Sibiraj, as the earnest cop, fits the bill, thanks to the convincing portrayal of varied emotions the character goes through. Suman, Nandita and Sampath are okay in their respective roles.

On the downside, the second half comes across as a tad long despite the film having trimmed its duration when compared to the original version. The presentation could have been a little more taut. The twists and turns do work; they would have been more appealing had the tension built around them was even exciting. The antagonist who was quite effective in Kavaludaari, appears less menacing here. Simon K King’s music and Rasamathi’s cinematography, however, support the slick narration. Overall, Kabadadaari is a faithful attempt in remaking a murder mystery.